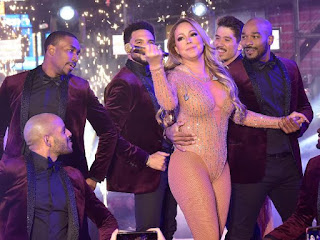 Mariah is the stammering embodiment of why the music industry has all but totally imploded. I'm not laying that implosion at her feet whatsoever. She's merely emblematic of the immovable heft of massive executive and star egos sucking dry an industry that mostly abandoned music somewhere in the '70s in favor of 'cool' until by the late '90s the major label industry was nothing but a marketing effort. So be it. Music is now made in bedrooms for the love of it. And in the meantime, entitled divas publicly teeter at the edge on national television. And there may be a certain... artistic inspiration... in that just yet.
Posted by D.L. Orris at 11:55 AM